Should the government be allowed to collect your DNA—and retain it indefinitely—if you’re arrested for a low-level offense like shoplifting a tube of lipstick, driving without a valid license, or walking your dog off leash? We don’t think so. As we argue in an amicus brief filed in support of a case called Thompson v. Spitzer at the California Court of Appeal, this practice not only impinges on misdemeanor arrestees’ privacy and liberty rights, but also violates the California Constitution.
Since 2007, the Orange County District Attorney’s Office (OCDA) has been running an expansive program that coerces thousands of Orange County residents annually to provide a DNA sample in exchange for dropping charges for low-level misdemeanor offenses….

In almost every case, proportional fonts are superior. They look better and they’re easier to read. One obvious exception is when programming but, even there, not everyone agrees. Still, most programmers are pretty firm in their preference for monospaced fonts when programming.
Some writers also like monospaced fonts when preparing their manuscripts, probably for atavistic reasons involving typewriters. I thought that was silly when I read it but then I realized I do all my writing in a monospaced font even though Emacs would allow me to easily use a proportional font if I wished.
All of that notwithstanding, it remains true that monospaced fonts are a bit harder to read. Blake Watson has a very interesting post… 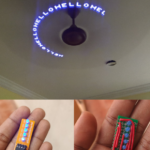 You don’t need much to do a persistence of vision display. A few LEDs and a processor is all it really takes. [B45i] made a simple PC board with five LEDs and an ATtiny CPU. There’s a battery and it connects to a fan to spin around.
While the project is pretty simple, we liked two aspects of it. First, he provides very detailed explanations about how to use an Arduino to program the Tiny using the Arduino IDE.

The other item of interest is the two web applications that can build arrays of data for the POV display easily. Examining the code is instructive, too, because of the use of bit coding and enumerations to save space.
The…