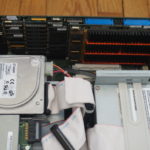 This post concerns the “MacIvory” Model 3 Lisp Machine. It is of interest strictly to bolixologists. Click on a photo to see detailed version. Machine chassis: The Ivory NuBus Board Set (i.e. the LispM itself, the Mac Quadra is otherwise ordinary): “Ivory” NuBus board, component-side: What’s under the labels? Bolix Label Part Notes 115999-B PLUS20L8 PAL, 14 inputs, 8 outputs, no registers 116000-B PAL22V10-10P PAL, 12 inputs, 10 macrocells, can have registers 116001-B PAL22V10-10P PAL,…


To all zero of my readers,

Ages ago, I disabled comments on my journal because I posted approximately never and the few comments I did get were always spam so it was just some extra noise for me to deal with. You could always comment if you logged in using openid… maybe a good filter once upon a time, but it feels like that never really caught on and fizzled out over the years (maybe there will be a resurgence now that ActivityPub is catching on).

Since I am posting regularly again (albeit as mindless sharing of links I find interesting), I figured I’d give opening comments in general another shot. You still have to provide your name and email address, and the first comment is always moderated as a trivial spam filter. After I’ve approved your email address, you can post away all you’d like. I am a bit wary of enabling proprietary SaaS like akismet, so that’s not enabled yet… hopefully deleting spam from the moderation queue doesn’t become a huge pain.

I guess that’s that.

That sandpaper-like texture of your cat’s tiny pink tongue is what makes it ideal for grooming fur. The secret: hundreds of hollow, rigid spines lining the surface of the tongue, according to a recent paper published in the Proceedings of the National Academy of Sciences. This is just the latest bit of colorful research from David Hu, who runs a biolocomotion laboratory at the Georgia Institute of Technology studying how various creatures move. He is… 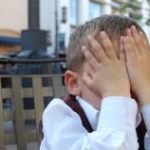 When piracy hits the mainstream news, it’s often in relation to books, games, music, TV-shows and movies. These industries grab headlines because of the major players that are involved, but they are not the only ones dealing with piracy. In the age of social media, photographers are arguably the most pirated creators of all. Many people don’t even consider ‘copyright’ when sharing an image they find online. That can be quite frustrating for people whose… 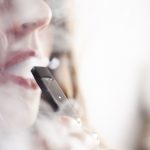 Twelve years ago, e-cigarettes couldn’t be found in America. Three years ago, Juul didn’t exist. But last Friday, Marlboro manufacturer Altria bought a 35 percent stake in the vaping juggernaut for $12.8 billion. The deal values Juul at $38 billion, a similar market capitalization to that of Target, MetLife, Delta Air Lines, and Ford. Fifteen hundred Juul employees split a $2 billion dividend as a result, becoming instant millionaires overnight. Juul was an inviting target for… 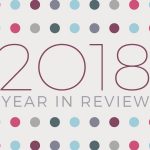 States are often the “laboratories of democracy,” to borrow a phrase from U.S. Supreme Court Justice Louis Brandeis. They lead the way to react quickly to technological advances, establish important rights, and sometimes pass laws that serve as a template for others across the country. This year, EFF worked—and fought—alongside state legislators in California and across the country to pass legislation that promotes innovation and digital freedoms. Increased Transparency into Local Law Enforcement Thanks to…


Thanks to moving to a provider that supports it, HCoop now has IPv6 support. After a bit of work on domtool, all member domains (including my journal here!) now have IPv6 enabled automatically.

We’re not doing anything too fancy (everyone shares one address for now, unfortunately our upstream provider has a weird implementation and we only get 16 IPv6 addresses per server right now), but it feels pretty cool to see the "6" in my menu bar from IPvQ.

We also finally implemented PHP 7.2 support, just in the nick of time. 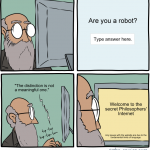 Click here to go see the bonus panel!Hovertext:Of course, all the really good philosophers are yelling on twitter.Today’s News:

We’ve seen internet-enabled holiday displays before, and we know IPv6 offers much more space than the older IPv4 addressing scheme that most of us still use today, but the two have never been more spectacularly demonstrated than at jinglepings.com. The live video stream shows an Internet-connected Christmas tree and an LED display wall that you can control by sending IPv6 ICMP echo request messages, more commonly known as pings. Reading the page, you quickly parse the fact…

When I look back on 2018, of course I see successes for user freedom across the world: the appeal in Christoph Hellwig’s GPL compliance case against VMWare is moving forward; Google employees are rallying against Dragonfly, the authoritarian search engine being built for the Chinese government; the Free Software Foundation’s (FSF) home state of Massachusetts is taking steps for the Right to Repair; and people all over the world shared their tips and tricks to…

When I look back on 2018, of course I see successes for user freedom across the world: the appeal in Christoph Hellwig’s GPL compliance case against VMWare is moving forward; Google employees are rallying against Dragonfly, the authoritarian search engine being built for the Chinese government; the Free Software Foundation’s (FSF) home state of Massachusetts is taking steps for the Right to Repair; and people all over the world shared their tips and tricks to…

Who else is excited for the new cocktail bar?It’s a new venture by [notable local restaurateur], the owner of [famous upscale bar], [spin-off of famous upscale bar], and [spin-off of the spin-off] — so you know it’s going to be good. The bar will feature inventive cocktails with a local twist, including hand-made [ingredient] from [local boutique food business]. There will also be a limited food menu of “small bites”, including such delights as [unexpected…

Every one of us will have a moment when global warming gets personal.

In 1994, the electronic pop band KLF burned a million pounds — money they had earned by following instructions laid out in a book they wrote called “The Manual”. To this day, they deny having a conscious justification for that powerful act. One possible interpretation is to see The Manual & the Burning as two sides of a single central thesis: a rejection of the connection between labor-value and price-value implied by money, through a violation of… 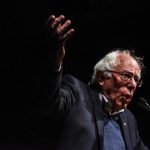 Sen. Bernie Sanders gives a speech at a “get out the vote” campaign event with Democratic gubernatorial candidate Christine Hallquist on Nov. 4, 2018 in Burlington, Vt. Photo: Stephanie Keith/Getty Images Who will be the Democratic nominee for president of the United States in 2020? Will it be Sen. Bernie Sanders, who came second in 2016? A growing number of voices, both liberal and conservative, loudly disagree. “I think his moment is passing,” says Daily…

2018-12-20  Comments Off on Critics Say Bernie Sanders Is Too Old, Too White, and Too Socialist to Run for President in 2020. They’re Wrong. The Intercept 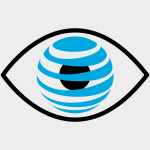 As the year draws to a close, so has EFF’s long-running Freedom of Information Act lawsuit against the Drug Enforcement Agency about the mass phone surveillance program infamously known as “Hemisphere.” We won our case and freed up tons of records. (So did the Electronic Privacy Information Center.) The government, on the other hand, only succeeded in dragging out the fake secrecy. In late 2013, right as the world was already reeling from the Snowden…

2018-12-19  Comments Off on Before and After: What We Learned About the Hemisphere Program After Suing the DEA Deeplinks 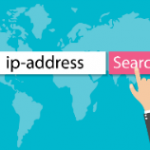 While it’s not getting making big headlines in the mainstream media, US courts are still loaded with BitTorrent related lawsuits. The cases are filed by a small group of copyright holders. To state their claim, these companies generally rely on IP-addresses as evidence. These IP-address details are collected from BitTorrent swarms and linked to a geographical location using geolocation tools. With this information in hand, rightsholders ask the courts to grant a subpoena, forcing Internet… 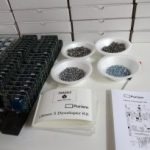 The Librem 5 dev kit’s hardware is done and shipping! We are beyond excited for our backers to receive their dev kits before year-end. Our entire PureOS Librem 5 development team will getting the same dev kits, upgrading the generic i.MX 6 boards (which most of the demos you have seen have been based on) to the Purism i.MX 8M based dev kit. We aim from this point forward to have a community assisted development… 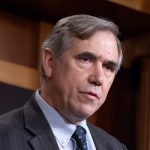 Sen. James Inhofe, an Oklahoma Republican recently elevated to chair the Senate Armed Services Committee after the death of John McCain, was implicated recently in what looked to be an insider trading scandal. A few days after meeting with President Donald Trump and Secretary of Defense Jim Mattis to successfully advocate for a military budget increase, Inhofe purchased between $50,000 and $100,000 of stock in defense contractor Raytheon, which stands to profit from additional defense spending. Inhofe…

2018-12-19  Comments Off on Sen. Jeff Merkley Wants to Stop Congress Members From Insider Trading By Banning Them From Owning Stocks The Intercept
Older Entries