So, the last few weeks have been exciting, at least in the garden. First, I realized that 1/2″ EMT was probably not going to be sufficient for the load squash and melons would put the trellis under. Tomatoes? Most assuredly… but the sag when loading it with even 40lbs was just a bit much for me. So, I upgraded the squash and melon sides to 1/2″ rigid conduit. Since the dimensions of my trellis are kind of hacky, I cut a 10′ tube in half using the current EMT as a guide. The unthreaded end I had to insert into 3/4″ EMT set screw connectors… so I had to replace the elbows with 1″ elbows and couplings to 3/4″ threaded pvc (the set screw connectors screwed nicely in place, better than the 1/2″ ones did). The threaded end screwed right into the 1/2″ threaded pvc.

Still not sure if the trellis will hold up, but we’ll see! 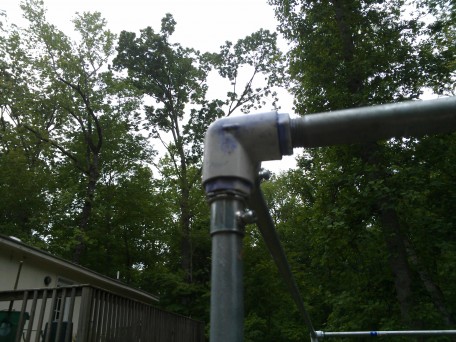 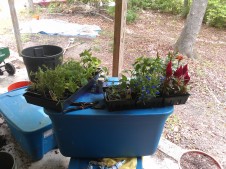 I made a mixed container of oregano, sage, thyme, and cilantro The banana peppers are doing well, but I think I have slugs… they haven’t crawled into the Hell or High Watermelon yet… 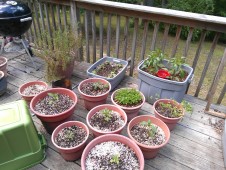 An army of peppers and other type things 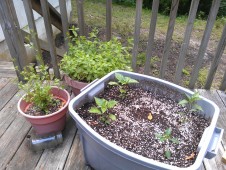 Habaneros, Thai Chile, and Serrano peppers. Also my overwintered Parsley that I am letting seed, and my overgrown flavorless mint that I’l letting flower for the BEES 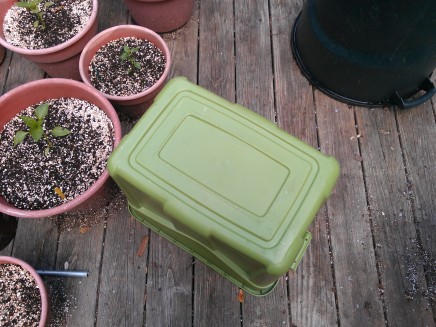 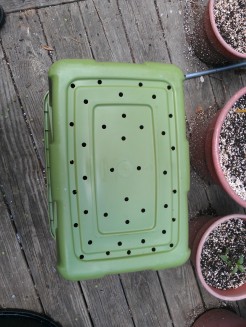 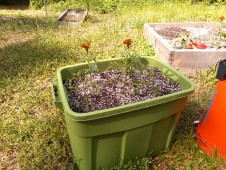 Three Juliette Tomato vines; the plan is to train them onto the back of the trellis and kill one if the media volume is insufficientk 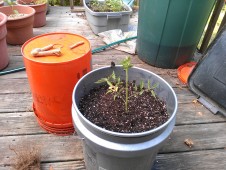 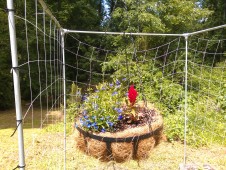 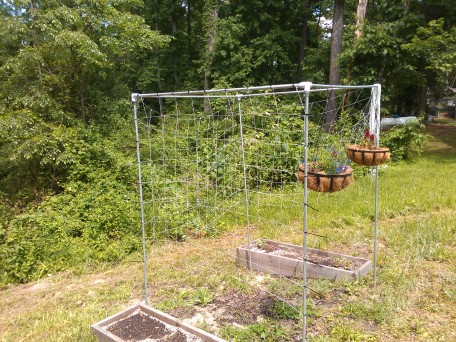 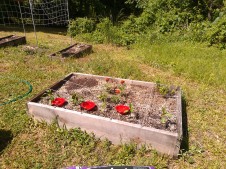 Four bell peppers, a poblano, and whatnot. Also garden slug traps because they are eating my peppers and I hate them all. 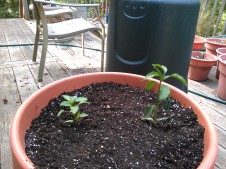 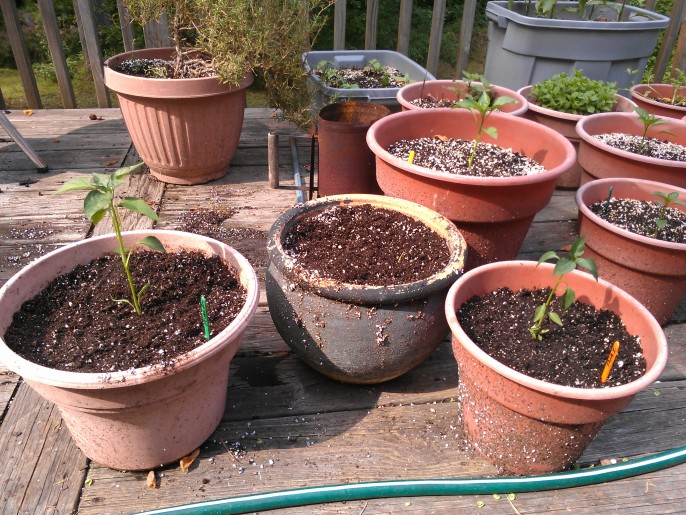 Decided to plan a poblano (left) and another thai chile (right). Fancy pot in the middle will probably be another rosemary

There are still a few more things to plant… we had to get another bale of Pro-Mix for bpt’s lettuce buckets, and now I can’t stop myself from trying to grow even more things.

I guess we’re down to wrapping up the trellis, constructing the platforms to keep the containers off of the deck, and hacking together some kind of protection from deer…

I didn’t die from the PVC cement fumes, and after that everything came together quickly (with assistance from bpt). 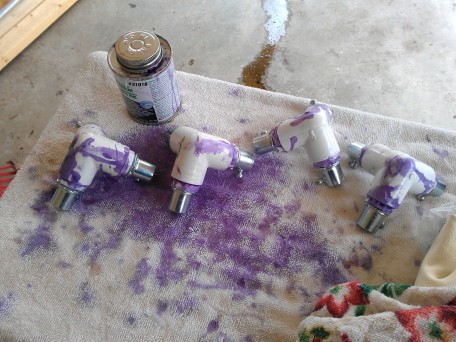 Cemented the pipe ends together 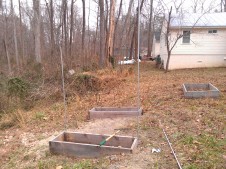 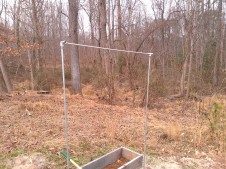 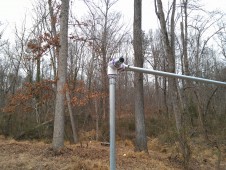 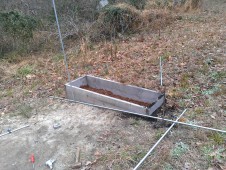 The poles are held in with rebar 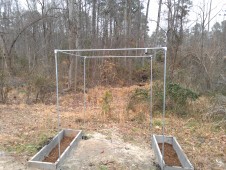 And done. Not quite even, but sturdy

At least the pair of adapters costs less than a single 3/4″ cotter pin, and it certainly is easier to deal with (build the elbows before hand, just tighten a screw to attach when I’m reaching for pieces above my head).

I guess I need to get some pvc cement… which costs as much as all of the EMT I’m using, so maybe I can find an alternative glue that will work acceptably for structural rigidity but not for pressurized water.

Last year I tried to upgrade my garden, but bit off way too much, ending with very little yield (only my containers, and then with only a couple of pepper plants since all of the seedlings died and I ran out of funds to get seedlings at that point).

So this year, something simpler. I’m going to try and germinate a few things (Aurora peppers, basil since I’ve had universal success, and kebab onions) and just live with getting transplants… and then some direct sown stuff (melons! squash! green onions! radishes! herbs!). This way, at worst I end up without a weird heirloom pepper I can survive without.

I also have the stuff I built last year: a pair of 5’x18″ beds dug into the ground (intended for use with a trellis), a 5’x3 raised bed ready to go, and the 18″ ends cut for another pair of 5′ or 6′ beds. And I happen to have 3 cubic feat each of peat moss, vermiculite, and perlite… a good chunk of hard work and expensive materials already exist, phew.

So! The first steps. I discovered that the city will sell me compost and mulch for dirt cheap, making this project affordable. $30 nets me a nice 65 cubic feet of compost, i.e. about three times as much as I need initially for all of the beds and my bins! Then, it looks like I can get enough topsoil for about $15. I’m probably going to nap a truckload of mulch too, since I need just enough that it costs as much to get it in smaller quantities, and there are a number of trees in the yard that could really use a good restorative mulching after years of neglect (exposed roots! weeds! erosion!).

The plan now is to make a base mixture of 1:1:1 peat moss:vermiculite:perlite (peat moss replaced with coir if I need a second bag… CAPTAIN PLANET), amended slightly with some light fertilizer. Then, for my containers, mix that 1:1 with compost. For the raised beds, I think I’ll start by mixing the compost/base mix 2:1 with the topsoil (the beds will have better drainage than the pots so I want to make the mix a bit heavier).

So… with the cheapness of city compost and already having plenty of base mix, onward! I think I’ll have the small beds filled within two weeks and plant some bunching onions and radishes, bpt planting some swiss chard and lettuce (yeah yeah, stereotypical early season crops WHO WANTS SOME SWISS CHARD). Those beds in June, however, get to start their real task: melons and squash!

So, a trellis is needed. I devised a garden cube based on the designs in Square Foot Gardening; instead of a free standing trellis per bed, I envisioned have four beds (= 12-15 trellised plants) and a cube of EMT conduit in the middle. And so it shall be, but with only two (perhaps three, but I have until June to care and it sure takes a lot longer to level ground that you think it would) beds. Supplies:

The idea is simple enough: hammer the rebar into the ground, fit the EMT over, use my convenient pipe cutter to get them all to the same height, attach the pvc joints using magic, and then cut/mount the EMT for the top bars.

The problem is the pvc coupling. In my vision, I imagined that there was a vertical Tee + 90″ corner elbow EMT connector using those convenient screws to keep it in place. As luck would have it, and for now obvious reasons, that doesn’t exist. But! The Internet to the rescue! You can use pvc plumbing fittings, but keeping it together becomes a bit more complicated…

I saw suggestions to drill through the connection and use a cotter pin… I have a feeling that’s what I’m going to do in the end, but that’s… a pain. I have a drill around, but applying the force needed to go through the EMT when it’s all wobbly seems like it’d be challenging, or result in a drill going through some part of my body as things slip.

So, I’ll be attempting an easier method, probably doomed to failure…

If it works, hooray. I won’t be grumpy if it keeps the structure rigid enough for me to drill the cotter pin holes.

In any case, that damned trellis is getting built.

Bonus feature: I was thinking about getting a small green house or constructing a cold frame to germinate the peppers in (it would require hundreds of dollars of lighting crap to successfully start them, I think… sunlight is better than anything I can provide, except for that pesky freezing temperatures thing). Today, it dawned upon me that I already have a greenhouse… since I don’t need the trellis until June and it’s already a rigid cube… I just need a bunch of zip ties and plastic sheeting and I think I’ll have an effective environment for starting seedlings.

In theory, HOT PIX OF THE GARDEN CONSTRUCTION SCENE TOMORROW.