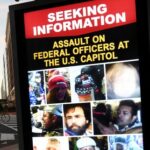 With the U.S. Capitol building seen in the background, a sign on a bus shelter asks the public for information about people involved in the Capitol insurrection, January 19, 2021.

Photo: Paul Hennessy/SOPA Images/LightRocket via Getty Images
On Tuesday, a Florida judge sentenced Daniel Baker, an anti-fascist activist, to 44 months in federal prison for social media posts that called for armed defense against possible far-right attacks on the state’s Capitol in the wake of the January 6 riots. Baker, a 34-year-old yoga teacher and emergency medical technician trainee, had no previous criminal convictions and has already been held for 10 months of harsh pretrial detention, including seven months in solitary confinement. He never brought a weapon near…

2021-10-16  Comments Off on The Intercept – A Florida Anarchist Will Spend Years in Prison for Online Posts Prompted by Jan. 6 Riot 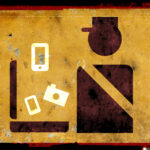 We do not lose our constitutional rights at the border. The U.S. Department of Homeland Security (DHS), however, believes you do. In fiscal year 2019 alone (before the pandemic curbed international travel), U.S. Customs and Border Protection (CBP) officers conducted nearly 41,000 electronic device searches without seeking a warrant supported by probable cause of wrongdoing from a judge. Unfettered border searches of electronic devices pose a significant threat to personal privacy. That’s why we urge Congress to pass the Protecting Data at the Border Act, a bill recently re-introduced by Sen. Ron Wyden (D-OR) and Sen. Rand Paul (R-KY) that would create a warrant requirement for these types of searches, thereby protecting our constitutional rights at…

2021-10-16  Comments Off on Deeplinks – Come Back with a Warrant: Congress Should Pass the Protecting Data at the Border Act

Facebook policy dude/failed UK politician Nick Clegg has written an op-ed for USA Today confirming what has been obvious to everyone who understands Section 230, but (for reasons I don’t quite understand) seems obscured from basically every politician out there: >Facebook wants to destroy Section 230. And it’s practically giddy that politicians are so eager to grant it its wish, while pretending that doing so will somehow hurt Facebook.

It remains absolutely bizarre to me that many people still believe that getting rid of Section 230 (or even reforming it) is a way to “stop” or “hurt” Facebook. Section 230 is a protection for the users of the internet more than it is for the companies. By… 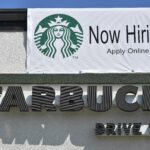 Starbucks has temporarily closed two stores involved in a union drive in Buffalo, New York, that are leading what could soon become the first campaign to successfully unionize the coffee shop giant.  The company said that the two temporary store closures in Buffalo have nothing to do with the union drive—one is for a remodel and the other is for training new hires. But shutting down locations and separating and fracturing workforces in the middle of a union drive is a standard practice used by anti-unions employers to stamp out union drives.  Starbucks is working with Littler Mendelson, the largest anti-union law firm in the country, on the union drive, and has flown in executives from…

When food trucks start rolling up, developers usually aren’t far behind. Photo by Samantha Trauben/Getty Images for International Rescue CommitteeEverybody, it seems, welcomes the arrival of new restaurants, cafés, food trucks and farmers markets. What could be the downside of fresh veggies, homemade empanadas and a pop-up restaurant specializing in banh mis? But when they appear in unexpected places – think inner-city areas populated by immigrants – they’re often the first salvo in a broader effort to rebrand and remake the community. As a result, these neighborhoods can quickly become unaffordable and unrecognizable to longtime residents. Stoking an appetite for gentrification I live in San Diego, where I teach courses on urban and food geographies…

Ian Brackenbury Channell has served as the official Wizard of Christchurch, New Zealand since 1998, earning an average salary of about $11,000 USD paid for by the city council in exchange for his services. According to his contract, the wizard’s duties are “to provide acts of wizardry and other wizard-like-services — as part of promotional work for the city of Christchurch.” — Read the rest 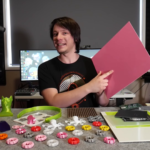 Print surfaces have been a major part of 3D printer development and experimentation since the beginning. [Makers Muse] has been experimenting with G10, a cheap high-pressure fiberglass laminate, and found that it’s an excellent candidate for most of your FDM printing needs. (Video embedded after the break.)
You’re probably more familiar with the fire-resistant version of G10, FR-4, the fiberglass substrate used for most PCBs. It’s also known by the brand name Garolite. [Makers Muse] tested with PLA, PETG (on his headphone build), ABS, ASA, PET, PCTG, and nylon. All the materials displayed excellent bed adhesion when heated to the appropriate temperature, and would often self-release the part as it cooled down. For TPU, the bed was…