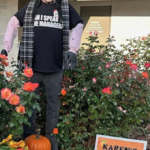 Some folks complained that the display was “offensive to certain type of women,” and city hall was forced to take it down.

The display featured a scarecrow wearing a “Can I speak to the manager?” t-shirt and a “Karen” nametag.

Further, the city says the display was not a political statement, nor was it targeted at a specific individual or group, and that they have investigated the issue internally and did not find anyone who participated in the display intended malice.

Moving forward, the city says there will be staff trainings as to why this was “insensitive and offensive to their community.”

(Time to bring back the “we’re a culture not a costume” memes.)