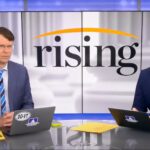 Ryan Grim, left, and Robby Soave, right, host The Hill’s morning politics show “Rising,” in a screenshot from a YouTube broadcast in March 2022.

Photo: The Hill
The politics morning show “Rising,” produced by The Hill and which I currently co-host, was suspended by YouTube on Thursday for allegedly violating the platform’s rules around election misinformation. Two infractions were cited: First, the outlet posted the full video of former President Donald Trump’s recent speech at the Conservative Political Action Conference on its page. The speech, of course, was chock full of craziness. Second, “Rising” played a minutelong clip of Trump’s commentary on Russia’s invasion of Ukraine, which included the claim that none of it would have happened if…