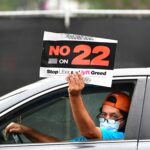 On Friday, California Superior Court Judge Frank Roesch ruled that Proposition 22—the ballot measure written by Uber, Lyft, Doordash, and Instacart to deny drivers and couriers the benefits and protections of employee classification—was unenforceable and unconstitutional despite the deep-pocketed campaign’s victory in November.  Writing in favor of the petitioners—the Service Employees International Union and three drivers—Roesch concluded that Prop 22 appears to only “protect the economic interests” of gig companies and undermined the constitutional authority of the state’s legislature to write and enforce labor laws. Specifically, Roesch pointed at a part of Proposition 22 that required a seven-eights legislative majority to alter Proposition 22, but even then only with the approval of the gig company drafters….