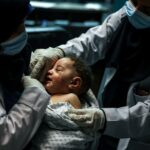 GAZA CITY — Dr. Khaled Harazeen described the scene at al-Shifa Hospital in the occupied Gaza Strip as “catastrophic.”
“We are already working within extreme limitations and now we face dozens of victims at a time,” he told The Intercept. “We try our best to triage the cases, but there are so many wounded. The end result is a lot of deaths and an unbearable load on the medical staff.” Harazeen added, “We are shattered.”
Leading up to the ceasefire announced on Thursday evening, the medical professionals of Gaza’s main hospital had worked around the clock for more than a week to treat the soaring number of war injuries inflicted by Israeli airstrikes — nearly 2,000 in only 10…